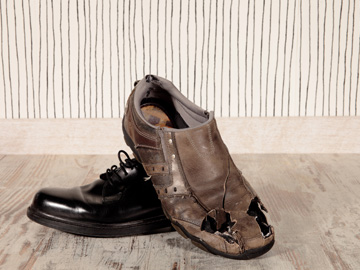 Author's note: I was much younger when this happened (twenty-five years ago). I regret some of my actions, although I don't feel anyone was especially injured by them. If I could, I would apologize to the railroad companies and others. But it's been too long, so I'm letting it ride. I don't endorse jumping trains or hitchhiking. Either can be quite dangerous, and jumping trains almost always is illegal. If I rewrote this today, my perspective on a number of things would be different.

Hopping a train focuses your attention, especially when it's your first time. More especially, when the guy you are hopping with is an ex-con. For murder. But there I was, in Las Vegas, in the train yard, sneaking onto the third of four engine cars.

There were four of us: a camo-dressed survivalist, a hitchhiking wanderer, me, and Mad Dog. If I had wanted to be creative and come up with a name for an ex-convict murderer to make my story sound intriguing, "Mad Dog" would serve as well as any, but that is truly what he called himself. A verified murderer, he was one of those killers you are "more" okay with, as he took out the guy that raped his niece. Still, not exactly the guy you introduce to your sister. Like a wannabe Fellowship of the Ring, we were ready for our adventure.

We all had shared a room together the night before. Not a hotel room exactly. A bigger room. Picture your high school gym. Now picture your high school gym covered with bodies. Not dead bodies, fortunately, but sleeping bodies. Now breathe deeply as you imagine those same bodies not having showered for a good week or so. Such is sleeping in a homeless shelter. Your first night is pretty rough. By the second night you are so tired it doesn't matter anymore.

For reasons too deep to address here, I had decided to see what it felt like to be homeless. During the first few days of homelessness in Vegas, I met Mad Dog. Mad Dog suggested we head down to California by train. My hitchhiking friend wasn't keen on the idea. He tried to sell me on the virtues of hitchhiking.

"I hear it's kind of dirty," I said, trying to keep the skepticism out of my voice.

"Um...," I scratched my chin as if deep in thought, "wouldn't the conductor have something to say about that? I mean, wouldn't he kind of get tired after a while, you know, standing up and all? Plus," I tried not to make it sound too obvious, "he might think we shouldn't be in there with him in the first place."

Mad Dog gave me one of those looks you give someone when, just because you like him, you decide you will be patient with him, even though he is an idiot.

"How many engine cars are on a train?"

It was one of those things I probably had seen a million times before and never noticed.

"Almost always three or more," he said, as if this completely answered my question, "and most of the time four or five. The conductor stays up in the first car, unless there is engine trouble."

"So, we sit in the back engines!" My proverbial light switch was flipped.

The thought of train-hopping did have somewhat of an intriguing feel to it. Hey, a little adventure!

Vegas has a fairly well-patrolled train yard, and that adds to the excitement. It's always an adrenaline rush sneaking onto a train. During subsequent hops at the Vegas train yard, I was amazed at how many people hopped trains. I would call it the illegal immigrant super highway.

We snuck in and we snuck on. I wouldn't exactly call train-hopping first class travel, but riding in the conductor's seat is pretty comfortable. Although no stewardess asked me if I preferred juice or soda, there was a little refrigerator with containers of bottled water. I drank my beverage, stretching out in my conductor's seat, while never bothering with seat belts or putting my seat into an upright position for takeoff. I slept.

I awoke to Mad Dog's prodding. The train had stopped. Mad Dog was worried that maybe they were searching the train for hoppers. We exited. He informed me that we were near Barstow, Calif.

Our hotel room that night had fancy glasswork. Thousands and thousands of shards of it spread out in irregular patterns on the floor. I took my foot and scraped out a silhouette before lying down between the crystals. Abandoned gas stations work as well as anything else when rain is a concern. The trick to sleeping on concrete is rolling up a shirt (or something soft) and placing it right below your hip so the hip doesn't rest on the ground. What a sleep!! I leapt up in the morning raring to go.

Or maybe the sleep wasn't really that good. Maybe it was my adrenaline from wondering who owned this abandoned, dilapidated building and whether they wanted us inside.

We caught an easy ride to Barstow and the shelter there. After my concrete mattress the night before, the homeless shelter felt like a Marriott. The "fellowship" decided to stick around in Barstow that night at the shelter. I determined I would strike out on my own the next day. I figured I would head north to Sacramento. After a hot shelter breakfast, the usual-SOS (if you don't know, google it), I headed out.

As it was my first time hitchhiking on my own, Mad Dog wanted to walk me down and show me the ropes. Mad Dog treated me like Mad Puppy. We headed toward the onramp.

"Why are you here?" Mad Dog asked suddenly.

I marveled at his perception as I hadn't told him or anyone else of my situation.

He nodded. "I know all about not wanting to explain."

We walked on in silence, somehow knowing each other better. After another mile to the onramp, Mad Dog showed me how to stick out my thumb. After thank yous and goodbyes, he left me to my fate. Although there was no tearful parting, I was sad to leave him.

The thumb extension for hitchhiking is actually quite technical at first, but after about four seconds, you start getting the hang of it. It's all in the angle. Basically, the tip of the thumb must be extended in the direction you want the ride (for anyone reading who might want in on the more scientific side of hitching).

What I didn't get the hang of is the patience needed. I actually never have gotten the hang of it in successive hitchhiking encounters. Hitchhiking is long and boring, until you get a ride. I think I stood on the onramp for about ninety minutes, but it seemed like most of the day. The hitchhiking gods were smiling upon me that day, however, and my first offer took me all the way to Sacramento--more than 400 miles away.

In subsequent hitchhiking experiences, I realized that that was akin to a minor miracle. You never get a ride exactly where you are going on the first ride. Especially on a California freeway.

Dropped off at the source of all useful city information, a convenience store (this was 25 years ago), I quickly obtained a phone book and looked up a law school student friend of mine. Clay, knowing of my wandering ways, didn't miss a beat with my call. He informed me that he was preparing to attend a winter formal for the university and he would grab an extra suit for me. He picked me up and we went over to our dates' apartment (it just so happened that Clay was taking two girls to the formal). As time was of the essence, we decided that I would shower at the girls' place.

A week or so of being homeless and I wasn't exactly looking my GQ best. Upon entering her apartment, my date's question (out of earshot) was, "Is he safe?" A shower and suit later--Clay only buys the best suits--and I changed her mind.

Law students' winter formals are rather boring. Drunk future lawyers are not exactly exciting conversation. Which was fortunate. It gave me a little time to think.

I looked around at the catered food and drink. Fruits, meats, crackers, and sweets piled so high that they never would be all eaten. I saw suits, tuxes and evening gowns of the finest materials. The smell was cologne and perfume. A band played. The building was beautifully decorated. Late model cars lined the parking lot.

I looked at the students. I saw fatness of frame too often accompanied by leanness of soul. I saw eyes full of hope, ambition, lust, and greed. I looked and saw the next wealthy class of America. I saw pride looking down.

I thought of waking up in the shelter that morning, a shelter that needed new paint and extra help in the janitorial department. I saw food not bought or wanted by someone else, and therefore delegated for us. There were dirty second-hand clothes and dirty bodies. I saw backpacks, and other burdens not so obvious. I smelled sweat mixed with alcohol, drugs, and tobacco to a degree that almost sickened me. Transportation was holey socks with worn-out shoes.

When I looked at my shelter mates, I saw addicted bodies and addicted minds that couldn't conceive of something better. I saw craftiness in milking the system. Too often, I saw hopelessness, laziness, idleness, ingratitude, anger, and resentment. I saw pride looking up.

Was this the same world? Had I been teleported to a distant realm? If the pinch test is the discerner of reality, I still wasn't so sure after the pinch. Reading Tolkien didn't seem as fantastic as the last twenty-four hours. A crazy day with two worlds on the same planet.

Enjoyed it Dan. Kind of scaredy too.

I've always been fascinated by this story, and it was super interesting hearing even more details. Very poignant point you make. There are so many different realities in our world, all floating around each other bumping into each other. We think our reality is THE reality, but it's just one of an almost infinite number. Even more powerful because it's not fiction, but real life! Thx for sharing