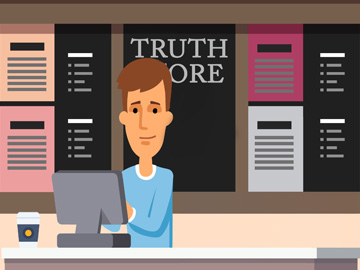 Harvey glanced at the line. Still four people in front of him.

"How can I help you today?" asked the man behind the counter. His name tag showed a poorly scribbled "William."

A woman, maybe fifty, with silver-speckled hair, answered. "A small truth at work, when I normally would have lied. Not much, I know. I probably shouldn't have even come in, but I want to see if I can get something for it."

She quickly glanced up at the clock and then back at William. "I'm sorry for wasting your time."

"No problem," smiled William, "that's what I'm here for."

He started to type into the machine in front of him, while speaking to the woman.

"Two days ago, on Wednesday."

"I'm sure it is hardly anything." She turned and glanced at Harvey and the others in line before turning back to William. "I'm so sorry for taking so long! But if it were worth something, I could sure use it right now."

Her voice went up two pitches. "Eight thousand dollars? You're kidding--aren't you?" Harvey wasn't sure if she was breathing.

The smile never left William. "I'm not kidding at all." He gave a small chuckle. "You can believe me; I work in a Truth Store."

The woman slowly shook her head and whispered. "But it was only a small truth. I would be surprised if it were worth more than eight dollars."

William nodded. "That is the thing about truths and untruths. You can't ever tell how much they're really worth or how much they'll cost. Sometimes the ones you think will be worth a lot aren't very valuable monetarily."

The woman kept shaking her head. "You're serious? My truth is worth eight thousand dollars?" She asked it like someone waiting for a big joke to end.

"One hundred percent serious. But sorry, it's actually only worth seven thousand eight hundred and ninety seven dollars!"

She was quiet for a moment and then jumped and screamed like Harvey's daughter when he told her they were going to McDonald's. Her arms shot out toward William. "Can I hug you?"

William pointed to a small video camera in the corner. "We're on camera and my boss doesn't like me hugging our customers. But congratulations! Sometimes honesty does pay."

The woman was crying now. "Thank you! Thank you, so much! What do I need to do to get my money?"

William walked to a printer, grabbed a sheet of paper, and handed it to the woman. "Take this to the bank and they'll cash it. Any bank will do. After all, we are the Truth Store. They all trust us."

"I think I love you," said the woman.

William laughed. "You and a few others; it will wear off."

"Thanks again!" yelled the woman as she rushed out the door.

"No problem!" William yelled back. "Keep telling the truth!"

William looked at the man who was next in line and smiled. "You get a full range of emotions at the Truth Store. And what is your claim today?"

Harvey guessed this man to be around thirty-five. His exact hair color was hard to tell because he had very little and what he had was trimmed with the lowest clipper setting.

"Wow! That was incredible." The man's face was taut, as if he was trying to show no emotion, but a smile kept breaking through. "Exactly the same as hers was, you know, a small workplace truth. But for all intents and purposes, exactly the same."

"Absolutely! You take all the time you need. That was nothing less than amazing. I can tell you know exactly what you're doing. You want me to go across the street and get you a drink or something? Happy to do it!"

"No thanks, I'm good," said William. He again gazed at the machine for close to another minute and then looked up with a pleasant smile. "Your truth is worth nine cents."

"How is it even possible mine could be worth nine cents and hers was worth eight thousand dollars when we basically told the same truth?" The man's voice slowly was getting louder. "She told a truth. I told a truth. It was even the same day! AND HERS IS WORTH EIGHT THOUSAND DOLLARS AND MINE IS WORTH NINE CENTS?"

William seemed as calm as could be. He spoke quietly. "Truths usually aren't worth much in dollars. Hers was an anomaly. However, your truth is worth more than 300 character points, while hers was worth only seven."

The man's forehead was a row of wrinkles pointing downward. "Character points?"

The man was nodding vigorously. "WELL! HEY! THAT MAKES ME FEEL BETTER! I'm sure those character points are probably worth ten dollars apiece. Right?"

William didn't react to the sarcasm but held his ever-present smile. "No sir, they're not worth anything as far as monetary value. But they're absolutely what it takes to build character."

"And you think I CARE ANYTHING about your character points? I want to speak with a manager. NOW!"

"I apologize, sir, but there is no manager in right now. He will be in on Thursday at eight a.m., though."

"Okay. But don't think this is the end of this! I know your name, WILLY, and me and your manager are going to have a talk!"

"Yessir. I'm sure he will be happy to speak with you. Thanks for coming in, sir."

The door slammed and William turned to the only other person in line besides Harvey, his smile never changing.

"Hi. And what is your claim today?"

This woman was probably in her late twenties. Her waist-length hair covered up the name on her Dodger jersey.

"Just a small lie. But I want to get it taken care of."

"I'd say roughly six months ago."

"Oooh," William said with a wince, "that isn't good. Your delay in taking care of it could cost you. We'll see."

William turned some dials on his machine and gazed at it for a little longer than with the previous two customers.

"Just as I feared," he said. "It shows here that you've told six more lies since then to support the original lie, and twenty-two other lies to support those six. None of these lies is a major lie any more than the original was. But lies seem to keep multiplying, when you don't take care of them quickly. Total damage is $279.93."

"Well, that isn't too bad. I was thinking it would be much more than that."

"The real problem is that it is costing you more than 2,500 character points."

"Oh, that is too bad," the woman said. She looked concerned, and said it respectfully, but her voice didn't sound to Harvey like she felt too badly about it.

"Sure," replied William, "whatever you say."

The woman paid, smiled, thanked him, and left.

Finally, it was Harvey's turn.

"And my name is Harvey Thompson."

William laughed. "Nicely done! No need for my normal questions; you know what I need. It will be just a minute."

He gazed into his machine.

"How accurate are these assessments and costs? Can you really calculate these correctly?"

William shrugged. "A lot of times we're pretty close. But how can you calculate the effects of a lie? Its effects could be never-ending. The same for a truth. You can't completely measure it. But we try."

"Is that good or bad as far as cost?"

"I'd say that is pretty average for both cost and character points."

"And character points, what are those?"

"Here," William said, "let me show you these and you'll understand better." He walked over and grabbed some sheets from the printer.

"This is a graphical representation of her virtue score. Basically, there is a black spot for each vocal or mental dishonesty. You can see that up until a few minutes ago, there was a big black area here on her psyche."

William pointed to a different page. "Here you can see it's changed from black to white after coming in here. And, of course, you can see other areas here that still have black spots. Those are other lies she hasn't cleared up yet."

Harvey studied the paper. "Okay. I see the black areas, but I still don't understand what it all means."

Harvey thought for a moment. "So, the only way to turn the black spots to white is to come in here?"

"Ahhh..." said William, pointing his index finger in the air for emphasis. "Good question. No. Not necessarily. This is one way to show recognition and make some restitution. The most important part is to quit lying. When the lies start compounding, that's when there are some big black spots on your psyche. If you stop lying, the black spots start fading. But interestingly, it's much more likely that you'll lie again, if you don't come into a store like this."

"Okay," Harvey responded. "What happens if I tell a truth?"

"Depends on the truth, just like it depends on the lie. Typically, the harder a truth is to tell, the more valuable it is for character points. Some truths, like honestly telling someone your name, are worth almost nothing. But truths where you have a lot at stake for being honest, those are the truths that are worth a lot to your character. Monetary value is almost impossible to predict before the truth is told."

Harvey considered for a moment. "Fair enough. Do you take credit cards?"

"Mastercard it is then. I appreciate the explanation, William. It sounds like it is well worth it to get this taken care of. Can I leave you a tip?"

"Nossir," William said, wagging his head. "We're not allowed to accept tips. Kind of you, though."

"Okay, then I'll try to call in on Thursday and put in a good word with your manager so that Bob guy won't give you a bad name."

William's beaming smile was even brighter. "That would be kind, sir. Although, I'm not too worried about it. My boss knows how the business goes."

Harvey grabbed the receipt William handed him. "Have a nice day, William. The next time I see you I want to be getting money from you instead of the other way around." He grinned. "I've only been here once, but I'm already tired of giving you guys my money."

William laughed. "Wouldn't have it any other way, sir!"

"Cheers!" Harvey said as the door closed behind him.

Finally had a chance to come over here. This was an interesting parable-esque story. Full of imagination and laid out in easy dialogue. Was that a little jab at Discover not being a reputable company?