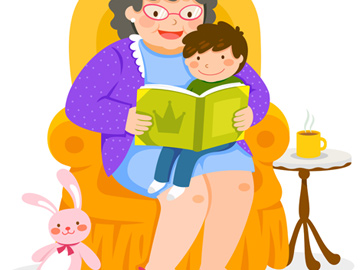 Little Bobby loved going to Aunt Zelda's house. She had the most wonderful cakes and candies, a playset in the backyard, and she knew everything. Since Little Bobby had an inquisitive mind, it was the last item that most endeared Aunty Z to him.

Today was filled with interesting things to learn.

Aunty Z and Little Bobby were playing with the blocks when the doorbell rang. He sprinted to beat her to the door, but tripped on a wrinkle in the rug, and instead stood behind her, nursing a skinned nose as the door opened.

Two guys stood at the door. They started talking about God but, as always, Aunty Z knew just what to do.

"You boys get along now! We don't need anyone telling us how to live. Just ain't right!"

"Do you..." One of the guys started to say something.

But Aunty Z jumped on him. "I TOLD YOU. You shouldn't be telling people how to believe or live. That isn't right. Listen to what I'm telling you. Don't tell people how to think! NOW GET ALONG."

The guys wished them a nice day and turned back down the walkway to the street. Aunty Z closed the door and gave Little Bobby the look. He knew what would happen next.

Little Bobby raced her to the couch and would have beat here there, but stepped on one of the plastic army soldiers he had been playing with earlier. He yelped and tried acting brave as he limped to the couch where she waited.

"Little Bobby, I'm going to teach you a very important principle that I want you to remember all your life, you hear?"

"Them dang religious people think they know what's best for others. But that ain't right. No one should tell others what to do. Do you understand what I'm saying?"

Little Bobby was sure Aunty Z was talking with Aunt Barbara. He loved their calls because they always discussed the most interesting things.

Unfortunately, this one wasn't that exciting. Aunty Z kept saying things like "Oh that is the most terrible thing I've heard in forever" and "Poor dear" and things like that. Little Bobby knew it was a very sad discussion. When she hung up the phone, he asked Aunty Z what he knew she wanted to hear.

"Hey Aunty Z, do you have something else to teach me?"

"Little Bobby, I'm very pained right now. You have to be a big Little man for the things I'm going to tell you. Can you be big for Aunty Z? She's going to teach you another important principle."

Little Bobby sat up as tall as he could muster. "Yes, Ma'am!"

"Do you know Rod and Suzy Phillips that live on the other side of the river? They have two new babies, twin girls?"

"You're right, Little Bobby. They used to be in school together. Remember, you have to be very tough for what I'm going to tell you. Rod, Suzy's husband, was killed in a truck accident today. So, she doesn't have a husband now. It pains me to no end. Poor girl."

Little Bobby felt enormously sad. He fought back tears because he'd promised to be strong.

"Now Little Bobby, Aunty Z is going to teach you something very important. Do you remember those two boys that came by trying to tell us to believe in God?"

"Good. Well this is a perfect example of why it's obvious there is no God that loves us. A loving God wouldn't let something terrible like this happen. Little Bobby, if there was an all-powerful God that could stop bad things, would he let them happen?

Aunty Z smiled her biggest smile. "I've always told your mother what a smart boy you are. You always understand the things I tell you. Oh! Look at the time! Your mommy will be here in a few minutes to take you to get your shots."

This time he didn't try to hide the tears. "But, I don't want to go get shots, Aunty Z. They hurt me."

"Now Little Bobby, Aunty Z is going to teach you one more thing today, so you listen up good."

"Sometimes we have to go through things that are hard. That is how we grow. Letting you hurt doesn't mean your parents don't care for you. It really means they love you. Do you understand Aunty Z?"

Little Bobby knew Aunty Z was right and nodded his head with all his heart. "I think I understand," he said. But then he thought of a question. "Isn't that kind of like..."

"Hey, Little Bobby, we know who that is at the door!"

Little Bobby sprang up and started running toward the door even before Aunty Z had moved. He would beat her this time for sure! Then the cat dashed in front of him and while dodging right to miss it, his foot landed on a dish towel and he slid into the wall with a nice thud. Scrambling up he saw Aunty Z at the door.

As he ran toward her the door opened and he ran into the arms of his mommy.

"Hey, Sweetie! Have you had fun with Aunty Z?"

He hugged her tightly and looked into her beautiful greenish-blue eyes. "Of course, Mommy. I always have a great time with Aunty Z. She's the best, and she knows everything."

His mommy laughed. "That's what she's always told me."