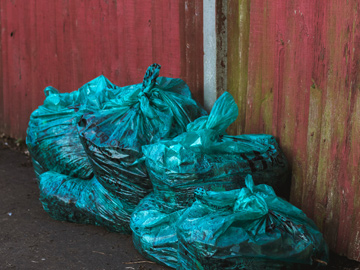 Joel jumped onto the step and grabbed his metal hold bar. After checking he and Sammy both were on, the driver continued forward. They had three blocks until the next stop past a busy intersection.

"I saw another reverence in that last one. That's the fourth one in the last two blocks."

Sammy nodded. "Sure. You'll see that one everywhere. It would blow your mind if I told you some of the things I've seen."

The truck stopped and they jumped off. Joel was on the driver's side and ran across the street to grab two cans. They were light enough to carry both at once. Arriving at the jaws of the truck he dumped each can, returned them to their original spot, and jumped back on the truck where Sammy waited.

"The only thing I saw in those was humility."

Sammy laughed. "You think anyone keeps that anymore? Where does that have any place in our society? That is always the first thing to go. When I started forty-five years ago, you'd never find a humility on a route. Now you can't go two houses without seeing it."

"I guess it's still surprising to me, even after doing this for only two weeks. So if you didn't see humility back then, what kind of virtue trash did you see?"

The truck hit a big bump and Joel grabbed his bar a little tighter.

"I think it really all started with courage. I'd see a courage in this can, two more in the next. Once courage was thrown out, it seemed as though everything else started following: integrity, modesty, patience, humility, prudence, charity, kindness... you name it. They all started going as soon as people started chucking courage. It's funny. You hardly ever see anyone throwing out fears, but courage, plenty of times."

They rode in silence for a moment and then Joel jumped off and dumped a heavy can and two light boxes. He jumped back on the truck. They were in a rural area now, more riding time and fewer stops. As usual, Sammy wanted to talk.

"I haven't just worked residential. I used to do commercial routes. Whoa! You wouldn't believe the things I've seen. Integrity in every trash can. And once I had a political route. I won't even talk about what I saw in those cans."

Joel faked a pained expression. "C'mon! I want to hear about it."

"Well, the weird thing is that it looked like they were throwing out virtues the same as everyone else, just faster. But I stopped and picked up an honesty one time. It looked like an honesty, but it was hollow inside. Just a shell."

"Have you ever worked at a university?" Joel knew he had. Sammy had told him the story five or six times in the last two weeks, but the old man glowed with importance every time he told it.

"You kidding me? There's almost no trash route I haven't worked. Course I did. Worked the state university up by the capitol for almost three years."

"And what did you see there?"

"The University route is one of the stranger areas. They throw out virtues just like the rest of society. But," he paused and looked around as if to make sure no one was listening, "they were distorted. Strange looking. Kind of twisted and creepy in a way."

"I've worked rough neighborhoods and seen more virtues in the trash than you ever could know. They throw out virtues everywhere in the ghetto. But at least they were real virtues. Honesty was honesty. Patience was patience. But what comes out of the university... sometimes it was like Frankenstein virtue. Like taking bad and trying to make it look good. I'm still not sure what it was. Strange stuff."

"Which decade was the worst?"

Sammy shrugged. "Since the sixties, it's just progressively gotten worse. There have been a few times where I've seen less virtue trash for a while. But give it a little time and there's always more. And then there are specific days or weeks that can be brutal or pretty good."

"I could give you hundreds of examples, but on specific days or weeks, the cans were full of a certain virtue. One example was in January, 1973. It seemed as though all the cans in the entire country were filled with charity. Every house we stopped at, they were piled high. My back was breaking that month. It was like the whole country threw out its charity."

Joel's phone buzzed. Glancing at it, he smiled at a selfie from his wife holding their two month old daughter.

Sammy continued. "Another was 1985 and 1986. I'd find restraint in the trash everywhere. Then, in October of 1987, courage and integrity suddenly filled up the cans. They were so heavy; I didn't know if I was going to make it to the nineties."

The truck came to a stop. In front of them, Joel could see a school bus with its stop sign out and lights flashing.

"On the other side of things, in the fall of 2001, there was very little kindness thrown out for a while," said Sammy. "No one had any extra; it was all being used. And then it can be seasonal. December is a great month for charity. You occasionally see someone throwing out a charity in December, but not very often. Sure saves my back."

"Are some neighborhoods or parts of town worse than others?"

"Oh, definitely," said Sammy. "And sometimes it's even specific to a house. I'll see the can piled high with integrity, kindness, forgiveness, and trust and I know their marriage is done. It's over! Seen it hundreds of times."

Joel nodded. "How long you going to keep this up? Aren't you ready to retire and move to a condo in Hawaii?"

"I wish!" Then he turned the other way; Joel could barely hear him. "I don't know. It's hard work, but I've been doing it so long. I don't know what else I would do. And then there's the automated trucks. I've heard of only one other company that still does manual pick up."

He turned back to Joel, his voice barely audible, "You don't think they'd try to automate these routes, do you?

"Couldn't happen!" lied Joel. "There's no way any automated truck could replace Sammy the Garbage Slinger! You're almost the super hero of the garbage guys."

"Yeah, thanks," Sammy said, noncommittally. "I hope you're right."

They arrived at the next stop.

"Whoa!" said Sammy pointing at a huge wooden crate. "That bin is huge and awkward. Looks heavy, too. The hope is piled so high it will fall out if we aren't super careful. It might take three of us."

Sammy yelled to Billy, the driver.

Bill appeared almost instantly, and he and Sammy each took a corner, while Joel grabbed the other side. Like careful pallbearers, they carried the bin to the truck, spilling a few items on the way.

Once they'd dumped the bin, Joel grabbed a kindness, two trusts, five hopes, and a family portrait, which had fallen out of the bin onto the street and deposited them in the jaws. He jumped onto his step and gripped his phone and the iron rod with more determination than ever as the truck moved on.

Great read. It made me think about what might be found in my own virtues trash. I hope you are submitting this to Christian magazines and other places. It would be a shame it this story didn't reach a large audience. All that said, you might consider adding a single phrase to that last paragraph to direct the reader's attention more strongly to the meaning behind him gripping his phone. You can do better, but a quick example to show what I mean: "glanced at the pictures of his wife and child on his phone, gripped..." Again, you can do much better, but do you see what I'm getting at? The way you've got it now is quite subtle. Some people will make the connection on first read through. Many won't and may be left feeling like the story didn't have a strong ending, when in fact it did but they missed it. Again, great story. Very well done.