The Question of Felicità 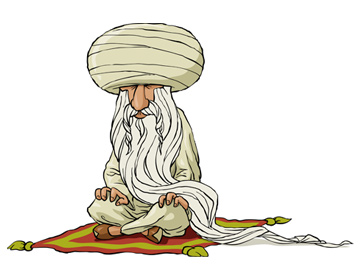 "It will! It will." She turned back and smiled at him, not slowing her stride at all. "Where else are you going to find the secret to happiness? I'd say it's only about another hour or two."

It irked him that she could talk normally, while he was gasping. "Fair enough... We'll see... I have my doubts."

Another hour or two? He glanced at his watch. He'd been timing it and they were coming up on two hours. She was setting a crazy pace and most of it had been up some major switchbacks.

They turned a corner and there was a mouth of a cave with a weathered wooden sign on a post driven into the ground. The sign said, "Senex." There was a second sign hanging on a nail protruding from the bottom of the main sign. On this sign was written, "Is In."

Olivia stopped and turned to him with that look she always gave when she was trying to feign surprise. "Oh, I guess it wasn't an hour. We made it!"

He suppressed his glee at having made it to their destination and kept his voice grumpy. "Wow. Impressive."

She was pretty, even when she glared.

"Chris! We've come all this way. Give it a chance."

He gave her the slightest nod and followed her into the cave which opened into a larger cavern. Multiple torches, hung on every wall, provided a decent amount of light. In the center of the cavern, a man sat on a rug in the sukhasan position with his eyes shut.

Chris tapped Olivia on the shoulder and gave her the "Should we wake him?" look.

"Give him a minute," she whispered.

At the sound of her voice, the man's eyes opened and his legs straightened out of the yoga pose.

"Thank you for finally speaking! I can only hold that pose for so long. But I do it when someone is visiting."

Chris wasn't sure what to think.

The man continued. "I am not really that into yoga. But it's great for effect when people first enter the cave. Everyone expects it these days... So what can I do for you?"

Chris looked at Olivia and then back at the old man. He'd come all this way for this? Olivia put her hand on his shoulder. It was her reminder to not get angry.

"Ahh," said the man bowing slightly, "a truly worthy pursuit. May God bless you in your quest."

The man said nothing more. The anger continued to build, but Chris pushed it back down. Minutes of silence grew until they became awkward. Chris cleared his throat loudly. "Well..."

The man looked at them again. "Oh, was there more?"

Chris did his best to smile. Olivia's grip on his shoulder tightened.

"Yes. Yes there was more. My mistake. I didn't really explain very well." He knew he wasn't doing well at keeping the sarcasm out of his voice. " Let's see if I can do better. We, my friend and I -- that girl over there and the guy standing right in front of you -- HER," he said while pointing for effect, "and ME, have come up all this way to visit YOU, so YOU can tell ME the secret to happiness in life."

The old man didn't seem to notice his tone of voice at all. "Ahh, that clarifies things greatly. What price have you paid to gain this important knowledge you seek?"

Chris tried keeping a serious face while thinking of something humble the old man would like to hear.

"Oh wise sir, we have hiked for over two hours to come to your wonderful abode that we might fill ourselves with your wisdom."

"You have definitely paid a price. I will in turn give you an answer to your question."

"The secret to continued happiness in this life is eating two Hershey's with Almond bars per day."

The man closed his eyes again.

Chris' patience evaporated. "That's the best you've got, oh wise one? We hike all the way up here to your hole in the mountain with the two-bit signs out front so you can tell us about chocolate bars? YOU ARE PATHETIC."

Did anger flash in the old man's eyes? His eyes met Chris's and didn't back down.

Underneath his anger, Chris recognized some truth in the old man's reply. He again forced down his emotions and spoke in a controlled voice.

"You're right; I'm sorry. Let me explain better the price I've paid. For the past ten years, I've searched for a deeper happiness. I've studied belief systems of philosophy, religion and politics and spoken to many representatives of these groups and even tried some of their practices.

"Last year, I met Olivia. She told me about you and how you helped her with a question she had. I've saved up for almost two years to come on this trip. Two nights ago, thieves stole my passport and I'm not sure how I'm getting home. Our bus bringing us here broke down yesterday, so we slept in a barn last night waiting for a new bus. And today we hiked two hours to arrive here."

Could the old man feel the weariness he felt? He never cried, but almost felt like he could. "That's the price I've paid--ten years of searching, a trip I can't really afford, my passport lost and sleeping in a barn. Not the highest price ever paid I'm sure, but I don't think it's a small price. I ask you again, can you tell me the secret to happiness?"

From somewhere in his robes, the man produced a cell phone and glanced at the screen while mousing his thumb over the face for a few moments. "Dang! The Lakers are up by twelve on the Suns in the third quarter."

He looked at them and motioned around the cave with his head. "You wouldn't believe what it took to get Wi-Fi in this cave."

Chris said nothing but his eyes caught the man's eyes and held them in a stranglehold. The man looked away for a moment and was silent.

"Ahh, yes. I like what you said. That is a much bigger price you've paid. I think such a price merits a deeper answer. But don't think the quest for your answer is finished. I will give you a key to your answer; then you must search from there."

"What's a major American city you like?" the man asked.

"Chicago. Nice. I could go for some Chicago deep dish... "

Chris tried to control his facial expression, but the man saw it and quickly cleared his throat and smiled.

"I'll tell you a story about a man in Chicago who needed to renew his driver's license. When he arrived at the administration building, he waited in a long line for an hour to finally speak with someone. The attendant told him he needed different paperwork. He returned home, grabbed the correct documents, and went back to the building.

He waited another hour in line and after producing the new paperwork was informed that instead, he needed the documents he had brought the first time. He asked to speak to the woman who helped him originally, but was told she was a new employee and didn't know proper procedures."

"How is the man feeling right now?" The man stopped, waiting for Chris' reply.

"Precisely right. He was irked but returned home and brought back both sets of paperwork. He waited another hour in line. Arriving at the window, he produced the two sets of documents. A manager was at this window and informed him he could get the license renewed without any of the paperwork. All he needed was his current license. When the man explained this was his third trip of the day, the manager apologized and explained procedures had changed, but few employees understood them yet. The man grabbed his new license and headed toward the exit."

"How is the man feeling now?"

"Frying indeed. As he exited, with the door slamming behind him, he saw a man painting the outside of the building. Two young boys were playing behind the painter. When he approached the three, one of the boys shoved the other boy into the painter, knocking him down. The boys, not falling themselves, quickly ran around the corner.

The painter, standing up and turning, saw the man behind him. Assuming the man had knocked him down for no reason, he grabbed a can of paint and threw it on him."

"Do you feel like you understand why he would be angry at the end of this story?"

"Now we will step away from America and I will tell you another story. A man from Chicago decided to vacation in a foreign country renowned for its scenic beauty. Traveling to the capital city, he checked into a hotel room, rented a car, and decided he would go experience some of the famed countryside.

As he drove through grassy hills and came around a curve, a sheep was standing on the road directly in front of his car. The man slammed on the brakes but not quickly enough to avoid hitting it. He hurried out to examine the animal. Two men, obviously shepherds, came up and spoke to him excitedly in their native language.

Soon a police car arrived and the man was taken to a police station. There, through an interpreter, he was informed he had killed one of the king's sheep and doing so was a capital offense. He learned he would be able to plead his case before the king the next day prior to his execution.

The man spent a sleepless night in jail before he was taken to the king. He wept and pled for his life. The king, realizing the man was a foreigner and didn't understand their laws, granted him his life and his freedom. After receiving the judgment, the man headed toward the exit.

As he exited, with the door closing softly behind him, he saw a man painting the outside of the building. Two young boys were playing behind the painter. While the man approached the three, one of the boys shoved the other boy into the painter, knocking him down. The boys, not falling themselves, quickly ran around the corner.

The painter, standing up and turning, saw the man behind him. Assuming the man had knocked him down for no reason, he grabbed a can of paint and threw it on him."

The old man paused. "Was the second man angry at the paint?" Again, he waited for Chris's answer.

The old man paused even longer. ""Which of the two men are you?"

The old man shook his head. "We all are both men. When you really understand and remember why the second man was not angry at the end of that story, you will understand the secret to happiness."

How did the old man know his name? He turned back to face him. "Yes?"

"Paint starts with P. So does Passport."

He put his hand in Olivia's and they walked back out into the afternoon air.

"Sorry. For being a jerk. It was good to come here. I still don't know the secret of happiness, but I felt truth in his words. I think he pointed me in a good direction. "

She squeezed his hand tighter as they walked down the trail.

Thought provoking!!! It left me with the question “which of the two men am I frequently like with my family, friends and co-workers:)