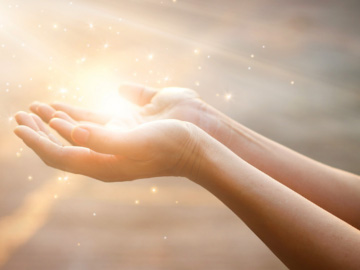 God respects courage; He rewards it. Inversely, He frowns on cowardice. And rightfully so, for our courage, to a large degree, is a measure of our faith. If we truly have faith in God—an omniscient, omnipotent being—is there anything to be frightened of?

What can that man fear who takes care to please a being that is able to crush all His adversaries?
—Addison

Religion can give man courage ... I mean higher moral courage which can look danger in the face unawed and undismayed; the courage that can encounter loss of ease, of wealth, of friends, of your own good name; the courage that can face a world full of howling and scorn-of loathing and of hate; can see all this with a smile, and, suffering it all, can still toil on, conscious of the result, yet fearless still.
—Parker

Yes; we should be that way. The opportunity is there, but we often live far below our privileges regarding courage from God. He watches. He waits—waits for those who will show courage enough to be truly useful. For those who do exhibit this virtue, there is endless work to do, endless opportunities and possibilities. But first, we need to find the courage.

God wants to be the source of that courage. He is the best source, the truest source.

In the whole range of experience, no quality is more attractive and enobling than moral courage. Like that mountain of rock which towers aloft in the Irish Sea, the man possessed of this principle is unmoved by the swelling surges which fret and fume at his feet. And yet, unlike that same Ailsa Craig, he is sensitive beyond measure to every adverse influence-battling against it, and triumphing over it by a power which proceeds from God's throne, and pervades his entire being.
—Holmes

Faith is always an act of courage. Before we receive any good thing from God, He requires a test of our faith and, therefore, a test of our courage. I am not speaking chiefly of the courage that flows from faith. I am thinking of open eyed faith as an act of supreme courage.
—Forsyth

As we grow in courage, God will help that growth to continue. He will assist us by supplying personalized challenges and trials which stimulate growth. Sometimes we will recognize that a trial is not self- or world- induced, but God-induced. These can be our most difficult challenges. God knows what will test us wholly.

He uses these opportunities to vigorously demonstrate our current courage level. To us, it isn't always clear what God is doing. We can be fearful, not trusting that God really understands what is best; frightened as well, that He does truly understand our potential, but we might fall short of His assessment.

Rather than fear, we should feel gratitude. God-induced trials are an indication of our potential from a source who knows us far better than we do. These trials will help us in two ways. First, it will help us to turn to God for more courage. Second, it allows us to find the true depths of our current courage, to discover those levels of which we were unaware. We come to know God and ourselves intimately.

It is also a test of our trust in Him, which smacks deep at the heart of courage. We can rebel at such a test—or submit. The courage to submit, the courage to be humble, is one of the deepest tests that we can face in this life. It requires great courage and great integrity to be humble.

Courage brother! Do not stumble!
Though thy path be dark as night;
There's a star to guide the humble,
Trust in God and do the right.
—Macleod

Such tests also help us to consistently remember God. We forget Him too often. This fact lessens our faith, and consequently, our courage. We go on in life forgetting God to varying degrees. But suddenly, a major crisis comes our way and we call upon Him fervently while fanatically attempting to please Him in some way.

Many never think on God but in extremity of fear; and then, perplexity not suffering them to be idle, they think and do as it were in a frenzy.
—Hooker

But rather than occasional bursts of speed, God seeks constancy. He requests and requires steadfastness and sureness, because those characteristics are His own. As we are consistent in our courage and other virtues, we become more like Him. And we mature.

Maturity certainly suggests our consistency in wise or important habits. Our constancy toward virtue and God must be better than that of a yo-yo dieter: just until we've reached our goal. Rather, true health, spiritual health, health in virtue, must be our goal.

As we recognize a God who is omniscient and omnipotent, we can fear such a being. But our fear should stem from the realization of our nothingness compared to Him. This fear should, in fact, lead us to a greater love of God.

'Fear of God'...never means to the Jews that they ought to be afraid of God, but that, trembling, they ought to be aware of His incomprehensibility...Only through the fear of God does man enter so deep into the love of God that he cannot again be cast out of it.
—Buber

I can hardly think there was ever any scared into heaven; they go the fairest way to Heaven that would serve God without a Hell.
—Browne

For appropriate conduct, fear usually is a poor motivator in both religious pursuits or elsewhere. Eventually, we realize that focusing too much on fear for adherence to God's principles only leads to abandoning them.

The predominant emphasis on the motive of fear for the enforcement of absolute commands has made religious morality develop the most intense cruelty that the human heart has known.
—Cohen

Some suggest that religion completely destroys virtue. For instance some have suggested that because God promises rewards, to perform a courageous act with the thought of such a reward, removes the virtue from the act. However, such judgments are certainly extreme and unwarranted.

The act of courageously defending one's family in war is not devoid of virtue simply because part of the reward is a continuance of living with that family. All or part of the motivation to fight might have been, to some degree, self-focused (wanting to continue to live freely with one's family); but this in no way dismisses potential for virtue.

Courageous acts must be judged from many angles to correctly assess the level of virtue. A pure heart can act with virtuous courage and still seek a proper reward. After all, God Himself wants us to seek those rewards that would be best for us. And He desires that we perform all acts, including seeking after His promised blessings, virtuously.

God will help us act with courage and virtue. However, if this courage is coupled with self-righteousness or smugness, it is weakened and diluted. God asks us to be courageous and considerate. He wants us to be brave and benevolent. Arrogance with regard to God-received courage thwarts, rather than promotes, His work.

Ultimately, one after another, we should conquer our fears. We should set some things behind us for good—forever. Those around us will sense our greater confidence.

His total focus is us: our pains, our difficulties, our fears. We simply need to answer his invitation: an invitation to greater virtue, to greater courage. We answer that invitation by finding Him.

He is the path to the pinnacle of courage—a courage so profound that neither poverty, pain, nor death itself can cause us to blanch. Rather, with this courage, we will face these trials and more with conviction and resolution. Such is the privilege of those who make God their source of courage.