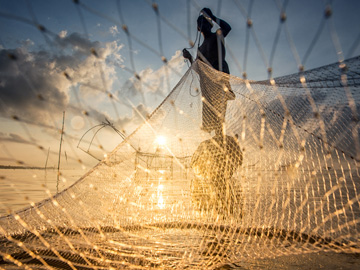 Luckily, no one she knew had seen them get in the boat.

"That won't work. Some will believe him and then what? I hate him."

There was no change in his expression. No anger at her disagreement. There never had been, and she knew there probably never would be.

"Not every statement needs to be responded to. Some, indeed, aren't worth responding to. Your true friends know what you're about."

Some, indeed? Who used words like that? He read way too many books. And what did he know about friends? Did he even have any friends? His whole life everyday was this stupid boat. She tried not to raise her voice.

"People don't check facts! They like to believe dirty things about people. If I don't call him a liar, people will think I did it."

He quit rowing. How far out were they now? She could see the shoreline in the distance. Could she swim that far if she needed to? He stood up, grabbed the net, and flung it like a big sheet onto the water. How could he have done this his whole life? No wonder they were poor. He probably didn't even realize how poor they were.

"Let your life give him the lie. Truth eventually emerges; sometimes our trying to help it, really hinders it."

He was always saying things like that. Cute little phrases she was supposed to be impressed with. He was pulling the net in now. He had skinny arms, but they seemed to know exactly what to do. She saw the fish in the net, some small and some large, splashing and fighting.

The fish tumbled into the boat, flopping and squirming like a hundred bugs on a hotplate of weathered wood. She dived for the largest, knowing it would bring in the most money. This one wouldn't get away; it was staying right here. Slipping and sliding through her hands, she finally grasped it. She turned to give it to her father for the final death blow.

Convulsing again, its size and strength threw her off balance, and she felt herself falling. An arm reached and steadied her, as the fish escaped her grasp. She watched the fish falling, falling. It hit the side of the boat and plummeted back into the water.
"Sit down."

There was no reproach in his voice. Did he feel anger? Ever? Her tears came.
"I'm sorry."

She hoped he understood that she meant more than just for the fish.

"No need to chase them all around. Sit down, and watch what happens if you don't try to force things."

She sat down and watched. The fish continued to flop and fret, bouncing angrily off each other and the walls of the boat. The sun felt good, and she felt the quiet of his ocean, barely interrupted by an occasional gull. Slowly, slowly, the fish wiggled less and less and were finally silent.